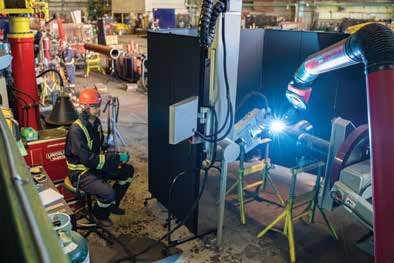 The implementation of Novarc’s Collaborative SWR is reported to have resulted in a three-to-five times increase in pipe welding productivity, potentially allowing the collaborative robot’s capital cost to be recovered in an average of six to 18 months. (Photo: Business Wire)

The Spool Welding Robot+HyperFill  (SWR+HyperFill), described as a “highly efficient dual torch system,” was unveiled at FABTECH 2021 in Chicago. Novarc Technologies is a Vancouver-based  robotics company specializing in the design and commercialization of cobots and AI systems for robotic welding applications.

“With Novarc’s SWR+HyperFill, pipe fabrication shops are guaranteed higher performance by being able to increase weld deposition rates and deliver excellent weld quality; lower the cost by reducing weld and material handling costs compared to the sub-arc process; and streamline and simplify production, resulting in a higher return on investment,” said Novarc Chief Executive Officer Soroush Karimzadeh, in the release.

The SWR uses a floating long-reach manipulator with a three-axis robotic arm at the end, which works with a human operator to increase their dexterity and flexibility. Implementation of the SWR has reportedly shown a three-to-five times increase in pipe welding productivity. According to Novarc, this potentially allows the collaborative robot’s capital cost to be recovered in an average of six to 18 months.

“We have seen productivity increase by more than 400 per cent with clients in industries such as contract manufacturing and shipbuilding,” Karimzadeh said in the release. “Still, we wanted to further develop the capabilities of the SWR for pipe fabricators. The outcome was the development of this new, breakthrough technology—SWR+HyperFill.”

Novarc’s welding automation technology is said to address the increasingly competitive market in a contract manufacturing and fabrication industry that is constantly under pressure to decrease bid rates and project timeframes. It is also said to help solve the welder shortage. Besides allowing highly-skilled welders to extend their careers, the technology enables less-skilled welders to work alongside the robot to do jobs that previously could be performed only by highly-skilled welders, according to Novarc.