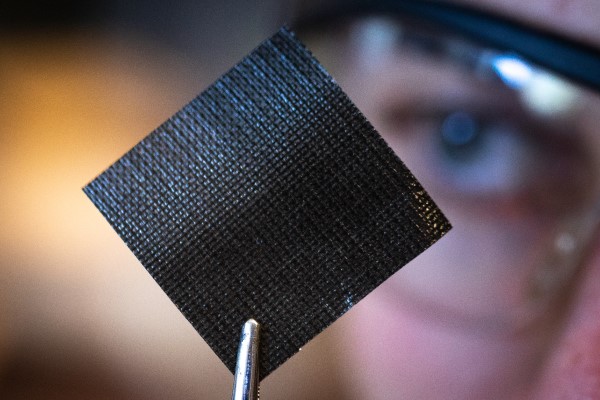 According to Allua, its composite materials can be as much as 50 percent lighter than competitive materials while providing equal or greater strength. (Photo courtesy Aluula Composites)

VICTORIA, British Columbia, CANADA—–New composite materials introduced by Aluula Composites are reported to combine outstanding strength-to-weight ratio with excellent abrasion resistance. Aluula is currently engaged in co-development efforts with companies in industry sectors that could benefit from the use of lighter, stronger soft composites, the company said in a release.

According to Aluula, the new materials are the result of “a discovery in the modification of polymers at the molecular level” that involves an innovative process for laminating layers of materials. No solvents or heavy glues are used during the process.

Aluula developed a patented technique for fusing dissimilar materials at the molecular level, eliminating the need for heavy glues and creating what it said are much stronger bonds between the laminated layers. Its use of fusion enables the formation of “ultra-strong bonds between a wide range of ‘impossible to bond’ polymers and other materials,” the company said in the release.

For input materials, the Aluula process uses what the company called “the strongest known polymers.” An Aluula composite material can reportedly weigh as much as 50 percent less than competitive materials while providing equal or greater strength characteristics. The process also accommodates the use of input materials that were previously difficult to bond to, unlocking “next level” technical specifications, the company said.

“Between the interest in our materials generated from the ISPO Awards and the transformational effect our composites have had in the wind sport sector, Aluula is now in co-development conversations with industry leaders from a broad range of uses and applications,” said Aluula Chief Operating Officer John Zimmerman, in the release. “It is an extremely exciting time for our entire team.”

The Aluula Vaepor™ series was recognized with the ISPO Textrends Best Soft Product Award for 2021/22. The series is said to provide the highest strength-to-weight characteristics, along with extreme durability.

The Aluula Durlyte™ series was recognized by ISPO Textrends as a Top 5 winner at the 2022/23 Awards, and also achieved finalist status at the 2021 Outdoor Retailer Awards. It is reported to be the most durable composite material available in its weight class. In third party abrasion testing, Aluula Durlyte is reported to be nearly “10 times more abrasion resistant than any other material available in the market.”

According to Aluula, its co-development efforts with industry leaders are driving further innovation and intellectual property in the material bonding sciences. The company said that “very promising additional cross linking technology development” is continuing between it and its chemistry partners.

Process Is Scaled to Yield Material with 90 Percent Graphene Content