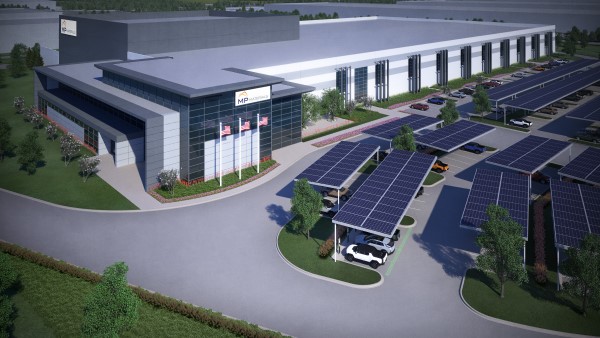 LAS VEGAS—MP Materials Corp., seeking to restore the U.S. supply chain for the rare earth (RE) materials that are crucial to numerous high-growth technologies, reported that it will build a rare earth metal, alloy, and magnet manufacturing facility—its first—in Fort Worth, Texas.

MP Materials owns and operates the Mountain Pass Rare Earth Mine and Processing Facility (Mountain Pass, California) and is reported to be the largest producer of rare earth materials in the Western Hemisphere.

The company said in a release that it has entered a binding, long-term agreement with General Motors to supply U.S.-sourced and manufactured rare earth materials, alloy, and finished magnets for the electric motors in more than a dozen models using GM’s Ultium Platform. MP Materials will begin a gradual production ramp in 2023, according to the release.

MP Materials will develop a 200,000-square-foot greenfield manufacturing facility in Fort Worth to produce metal, alloy, and neodymium-iron-boron (NdFeB) magnets. The facility will also serve as the business and engineering headquarters for its growing magnetics division, MP Magnetics. It is expected to create more than 100 skilled jobs and will be located in the Alliance Texas development owned and operated by Hillwood, a Perot company, MP Materials said in the release.

“MP Materials has built an exceptional magnetics team and important commercial relationships that will accelerate our mission to restore the full rare earth supply chain to the United States,” said MP Materials Chairman and CEO James Litinsky, in a statement. “This is a momentous occasion for the reshoring of the American supply chain, and we are grateful for GM’s confidence, commitment, and leadership.”

NdFeB permanent magnets are critical inputs to the electric motors and generators that enable EVs, robots, wind turbines, drones, defense systems, and other technologies to transform electricity into motion, and motion into electricity. Although development of permanent magnets originated in the United States, the U.S. has virtually no capacity to produce sintered NdFeB magnets today, the company said.

Like semiconductors, which became linked to virtually every aspect of life as computers and software proliferated, NdFeB magnets are fundamental building blocks in modern technologies and will increase in importance as the global economy electrifies and decarbonizes. Adamas Intelligence, an independent research firm, expects global NdFeB demand to double by 2030, driven largely by increased production of EVs, the company said.

The Fort Worth metal and magnet facility is deliberately sized to achieve commercial economics at the minimum required scale. MP Materials said this measured approach will enable it to refine its production processes and technologies, and apply learnings to future, higher volume facilities.

The facility reportedly will consume less than 10 percent of the 6,075 metric tons of NdPr oxide that MP Materials expects to produce annually at Mountain Pass. The company said that it envisions building additional alloy and magnet capacity in the future to consume a greater percentage of its primary production and to supply growing U.S. demand.

MP Materials’ operations, spanning California and Texas will provide certainty of provenance and sustainability. Mountain Pass is a closed loop, zero-discharge RE production facility with a dry tailings process that is said to recycle more than one billion liters of water per year. The facility operates in full compliance with U.S. and California environmental regulations, according to MP Materials.