Shimifrez Extends AS9100 Certification to Include Section 8.3 Design and Development 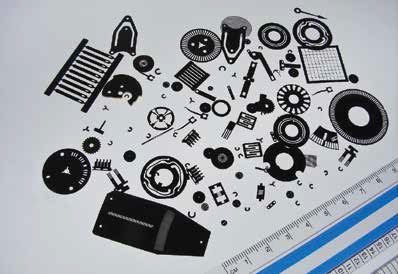 VAUGHAN, Ontario (Canada)—Shimifrez Inc., a maker of precision chemically-etched components, reported that it received AS9100 Section 8.3 Certification for Design and Development.

The certification aligns with Shimifrez’s plans to introduce a series of components designed to reduce part weight and increase manufacturing efficiency for clients in the aerospace and automotive industries, according to a release from Shimifrez. The company creates precision photo-etched, electroformed, thin and thick sheet metal parts for industries ranging from life sciences to automotive and aerospace.

The AS9100 standard codifies the quality management system requirements for companies that design, develop, or manufacture aviation, space, and defense products. Developed by the SAE and the IAQG, the standard serves as an assurance of trust and quality.

“We’re extremely happy to announce this AS9100 extension,” said Hassan Nojoumi, president of Shimifrez, in the release. “We’ve been in the precision sheet metal parts business for quite a while now, and we’ve certainly discovered a thing or two about manufacturing and design. We’ve been quietly developing a range of proprietary processes and products specifically engineered to effectively reduce weight and boost efficiency for both the aerospace and automotive industries. The new certification will allow us to unveil and roll out these designs in the coming months, offering them as innovative solutions to a broad range of industrial issues currently being tackled.”

Shimifrez said in the release that its activities in precision photo-chemical etching and electro-forming are already far reaching. Going forward, such activities will include creating critical components for hearing aids and other life sciences tools, as well as instrumentation for satellites and other space exploration vessels. They will also include crafting micro meshes and grids, and creating super-fine sieves.

“Photo-chemical etching has eliminated the cost of hard tooling and has enabled a manufacturing process that is far more accurate, with no deformations or burrs, and with much faster turn-around times,” he said in the release. “And we recognized that there’s a major market gap for accurate, flexible, and cost-effective thin metal components and services; along with new advanced technologies and investments in state-of-the-art capital equipment to lower production costs, increase productivity, and foster innovation. We’ll be showcasing many such new products in the very near future.”