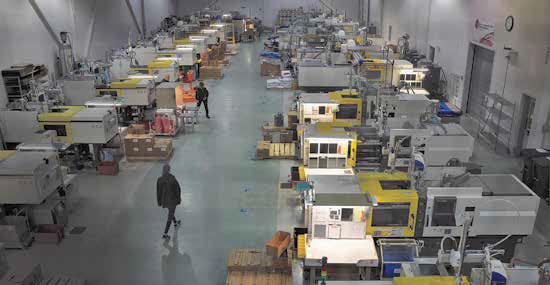 Company founder Johann Hofschuster, a classically-apprenticed and trained tool and die maker born in Austria, founded Atlas Mold in Arden, North Carolina, in 1979. He added plastic injection molding to the tool business, and combined the mold-making and injection molding into one company— Atlas Precision Plastics—under one roof in 2006.

“Our customers get molds built by a world-class tool builder and his team,” said Andreas Hofschuster, vice president of administration at Atlas Precision and the son of Johann Hofschuster. “Our biggest strength is our in-house building and repair shop. Injection molds need to be serviced from time to time, and with our experienced team at Atlas, we can do all of that in house, making it cheaper and quicker to get parts to the customer.”

Kanupp has more than 25 years of operations experience. He said customers own the tools Atlas makes for them, but Atlas typically keeps them in the shop for the next production run.

“Our 37 presses could be running, on any given day, a mix of automotive, aerospace, medical [parts],” Kanupp said. “We run 24/7. It’s really cost prohibitive to put a tool in a press and run it for less than a 24-hour run.”

“Sometimes, what we get is unmoldable,” Kanupp said. That’s when communication becomes king. “We build a tool that will meet your needs. For our more seasoned customers, when they send us an opportunity, we have a design review meeting with them. We may find the part is unmoldable. We have several meetings. The customer is very involved, and the more involved they are, the happier they are with the end product.”

At a time when manufacturers all across America are facing a daunting labor shortage, Atlas is proud of its success in automating its injection molding presses to pick and package parts. In the last eight years, Atlas has gone from having one robot—and very little technical knowledge of how to use it—to now having 19 robots.

Two engineers work on the company’s automation and robotics, working to automate as many presses as possible with high-precision robots. Their work includes designing and building robotic end-of-arm tooling that uses detection sensors to pick up parts without damaging them, and then place them in a tray to prepare them for packaging and shipping. Automating its presses in this way has enabled Atlas Precision to not only “speed up production,” according to Kanupp, but also “produce more parts more effectively.”

Atlas uses its own expertise to grow its use of robots. The company hosts a design kick-off meeting to understand an end-of-arm design before starting the design work. Its lead designer uses SolidWorks to design the end-of-arm tooling. Atlas’s engineers design and test the grippers and vacuum suction to ensure they could lift and move the part to its packaging location. At the end of the project, the company completes a validation step to confirm that the robotic tool increased production throughput.

Early in the COVID pandemic, a customer asked Atlas to make a part for a ventilator. Atlas had already made the customer a similar, but slightly larger part. But the ventilator required the part to be smaller, shaving off roughly a quarter of its size.

“We had to change the size, and we had to build a punch press to do this,” said Kanupp. “We had to alter the tool to make it work well enough for a ventilator. We needed tighter tolerances.”

With ventilators in short supply when COVID broke out, Atlas brought in tool makers and engineers to work all through the Easter weekend to tweak the smaller part. “Nobody minded because it was that important,” Kanupp said. The job required injection molding, polishing tools, a new fixture, mills, and “basically everything we have in the plant,” he said.

“On this project, we were working with four other companies in a couple of other states across the country. We’d make a sample, we’d tweak it, and send it around the country. We’d get feedback and tweak it again. It was very rapid. I remember being on conference calls with four other companies all the way up the line to the company who was assembling the ventilator,” Kanupp said.

Other companies working on the ventilator were in North Carolina, Pennsylvania, and Michigan. Getting the part right took four iterations. Each ventilator required two parts, so the final order for 300,000 ventilators required Atlas to make 600,000 of the 3-gram part.

In addition to remaining a full-service, plastic injection molder, Atlas Precision has kept to its roots as a full service in-house tool builder. The company manages a state-approved tool making apprenticeship that takes a person four years and between 6,000 and 8,000 hours to complete. Each year, Atlas takes two or three apprentices who have attended a local technical school, such as Ashville Buncomb Technical Community College (AB Tech).

Students come to the apprenticeship after studying machining at the technical school. They leave the Atlas apprenticeship as tool and die makers, in part because they are overseen by Andreas Hofschuster, whose father, Johann, trained in tool building when much of the equipment had no CNC options.

Kanupp said the teachers at the technical schools find the right student for the tool and die apprenticeship, partly because they can identify those who have the motivation to learn. “We have a good relationship with the instructors at AB Tech. They can tell the machinists from the tool makers,” he said.

Tool and die making isn’t for a person who only aspires to push a button to turn on a machine. The tool and die maker knows how a mold works, and how the pieces of the tool fit together. When faced with a defect, the maker figures out what went wrong. A tool may have between 1,100 and 1,500 metal parts in it. It’s a lot to trouble-shoot.

Reflecting on the special skills required by machinists and tool makers, Kanupp said that tool making is “more artistry than mass manufacturing, at least on the tooling side.” Andreas Hofschuster added his perspective on how their roles are different.

“A machinist thinks in two dimensions. They might make the same part 100 or 200 times a day, but a tool maker thinks in three dimensions,” Hofschuster said. “Each tool is different, so the part they make today may be the only one like that in their life. These tools are warrantied for a million shots. You may never see that part again.”