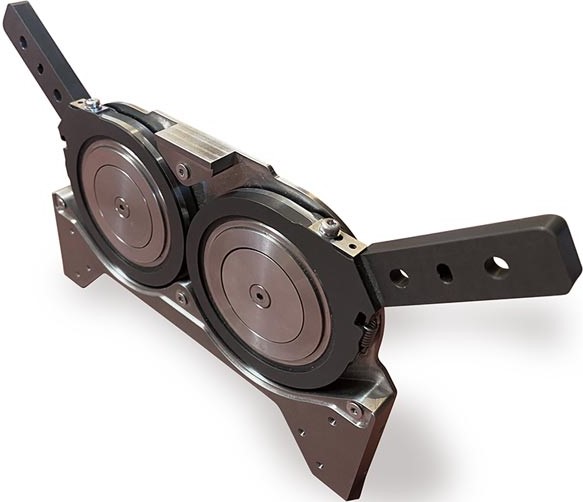 This wrist assembly includes two Belt Technologies bands, attached at the top with screws. When either side of the assembly moves, the wrist either closes or opens. The two sides are connected by the bands which guarantee the tandem movement. (Photo by Mark Langlois)

Belt Technologies Inc., of Agawam, Massachusetts, designs and builds the steel bands that control a robot’s wrist, and the belts that run on conveyors in semiconductor fabs and in food processing plants. The belts also run on conveyors that carry lead acid batteries through their manufacturing process, in part because stainless steel bands are non-reactive, strong, and durable.

In one robotic wrist assembly at Belt Technologies, the reinforcing tab at each end of the band is the spot where a steel band attaches to two pulleys that move the robot’s wrist.

“That’s a big part of what we do here—steel bands,” said Denis Gagnon, CEO at Belt Technologies, in an interview with Design-2-Part. “The welding involved is to weld a reinforcing tab on each end. Welding is our secret sauce, to a large degree.”

Belt Technologies’ manufacturing and welding abilities recently landed the company on the World’s Greatest, a television show on Bloomberg television. The firm employ more than 40 people at its 23,000-square foot facility in Agawam, and it exports about 40 percent of its output.

“The customer comes to us with an idea, and what we do is fill out their idea,” said Alan Wosky, president of Belt Technologies. “We offer our customers application experience.”

If a robot’s end effector is hand-like, and its motor is its muscles, then Belt Technologies’ bands are the “tendons” that help the robot grab and hold an object. The stainless steel band that moves a robot’s hand might be somewhere between a half-inch and an inch wide, while the belt on a conveyor system might be 18 or 24 inches wide.

Each band for each customer is custom designed. Gagnon said the band must work more than several million times without fail. On the robot’s wrist, they work in two directions—open and close. “It’s going to activate the robotic arm,” he said. “You can’t have a robotic arm fail and drop a wafer.”

Inside Belt Technologies’ factory are shelves holding hundreds of spools of stainless steel in various widths and thicknesses. Belt Technologies cuts the steel to customer specifications—to length, to shape, and to include any openings or markings to aid the customer’s manufacturing process. Stainless steel is the material of preference because it is strong, durable, and non-reactive.

“It’s going to give the movement without emitting any particles or gas,” said Wosky. “That’s critical in a vacuum chamber. There is zero backlash.”

There are generally two steel bands that operate the robot’s arm in a push-pull manner, with a very smooth motion. “It’s precise and accurate,” Wosky said of the movement. The semiconductor industry is also using the company’s belts and drive tapes for much the same reason—the precision and repeatability required in the automated production of semiconductor wafers and microchips.

The band inside a robot’s arm is a drive tape or an open band with specialized ends that Belt employees weld into place. The specialized end is added to exacting specifications. It must be cosmetically appealing, and the weld must be nearly as strong as the stainless steel around it. It must be flat, and it can’t be a weld that fails prematurely.

For years, Belt Technologies provided conveyor belt components to the lead acid battery market. The stainless steel belts were required to stand up to the toxic and corrosive chemicals that are byproducts of the battery production process. Today, Belt is seeing activity and clients in the electric vehicle (EV) battery manufacturing business.

“In that instance (EV battery manufacturing), there isn’t the environmental concern,” said Wosky, a degreed mechanical engineer and a U.S. Navy veteran who was EWS qualified on naval nuclear power plants, according to his LinkedIn page. “It’s really web transfer, but it’s very precise. They’re building up four layers of substrate. It’s a type of polymer they’re assembling on our belts, then they’re cutting strips from there. That’s done extremely precisely. In that application, the steel belt is being used because of its preciseness. It’s more like timing and precision and indexing.”

Belt Technologies is ISO 9001:2015 certified, and can hold a manufacturing tolerance of 0.0005 in certain materials in certain situations—for example, in the timing belts and pitch tolerances between features.

In the Belt Technologies factory, six Cartesian welding robots speed precision and production. The company has another laser welder on order for delivery in February.

“We need to weld faster,” Gagnon said, to keep up with customer demand. “The Cartesian robots weld a precise spot because positioning is controlled in the x, y, and z directions. These are the robots we have internally for our manufacturing process. The precision has to be there.”

During a recent visit to Belt’s plant, the firm was laser cutting a wider band for use on top of a conveyor in a photovoltaic cell assembly plant. Thousands of tiny holes were laser cut into it. Once inside the assembly plant, a vacuum under the belt would draw air through the holes to grip the cells as they were being assembled. On a different band, Belt welds numerous tiny attachments to the band. Those attachments were designed to carefully line up the material on top for precise indexing and cutting.

“Each belt has thousands of attachments, just to fit the web. The web has these rectangular attachments, and the polymer is mating with the holes,” Wosky said. “It’s not hot, not cold, not caustic. It must be precise.”

One parameter that is less important than precision is how much weight the belt can carry, Wosky said.

“What matters is the overall stress on the band, not the overall weight. It is really a stress management problem. You add up all the stresses on the band and keep these stresses substantially below the yield strength of the raw material. Specifying the correct material alloy and understanding all the stresses in the application will maximize the life of the band. It has to work for millions of cycles. To do that, you have to start with the base metal itself. We inspect it when it comes into the shop,” he said. 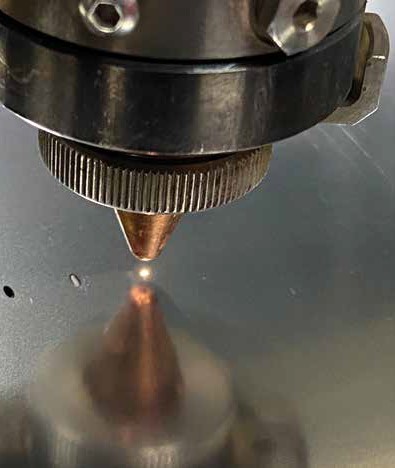 This automated laser cutter is cutting precise tiny holes in the stainless steel band that may be used in a photovoltaic cell manufacturing plant. The holes allow a vacuum underneath the belt to hold material in place on top of the belt. (Photo by Mark Langlois)

To work on a conveyor system, the steel belt must wrap around a pulley. That requires negotiating a complicated balance of strength and flexibility. “Obviously, metal is firm and strong, and it doesn’t want to bend too much. To wrap it around a smaller pulley, we want it to be as thin as possible, but still as strong as the customer needs it,” Wosky said.

“You can get the best of both worlds,” Gagnon said. “You have the reduced bending stress from each individual, thinner band, but you have the combined, additional strength from multiple layers. That ratchets up the precision required because each band has to be precise to fit around the other band and around the pulley. That amps up the difficulty level, but it meets the medical requirements for extra strength and extra precision. It’s not about the weight it can carry.”

Wosky said these smaller, thinner assemblies are useful in medical applications, which are often smaller than industrial applications. It was developed for use in medical robots, which require a smaller envelope (an arm versus a factory-sized conveyor belt.)

“That inspired layering. You’ve increased the thickness of the assembly and that allows it to carry a larger load,” Wosky said. “You can’t have a failure. You’re managing the bending stress by keeping it thin. That’s almost the greatest stress in any application—the  bending stress. That’s the pinnacle of what we do, the multi-layer band.”

Gagnon described Belt’s work in creating these assemblies as “very specialized,” noting its welders are mindful of the stresses in very thin material when welding. At the same time, the weld must retain as much tensile strength as possible, an extremely difficult task. Besides being flat and smooth, the weld cannot interfere with the process, and it cannot lose any integrity on the belt, he said.

“That’s where decades of experience on the design side—and the operator on the manufacturing side—turn work into art.”

But when it comes to turning work into art, there’s much more to the process than meets the eye. Quality designs don’t come to life from a single phone call, or without collaboration. 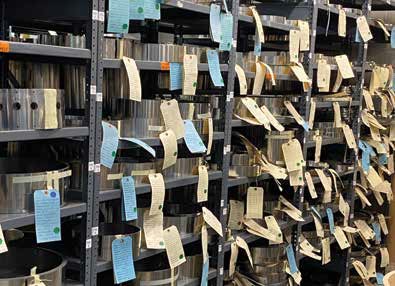 Finished bands and belts at Belt Technologies. These shelves give a small picture of the wide range of belts, drive tapes, and open belts the firm makes for a wide range of customers and markets. (Photo by Mark Langlois)

“This is not an assembly line that does the same thing over and over again,” Gagnon said. “Everything we do is custom. The collaboration up front with the customer is critical. We have sales engineers who are not just salespeople, but engineers. They’re very astute about working up front with the OEMs and engineers to solve their problems together.

“We bring the overall belting experience, but [customers] know what they’re trying to accomplish,” he continued. “That’s a lot of work up front. That means for every customer, there is a new belt design.”

The smaller belts are used in 3D printers. Other belts are used to convey medical samples, from the surgeon who collected it to the lab that will analyze it. In those cases, the conveyor system moves through various temperature environments without failure–for example, conveying biopsies within petri dishes.

In some cases, Belt Technologies does its best work when it builds the entire assembly.

“When we build the whole turnkey system, we build the pulleys, the belts, the support structure, the frame, the motor control system, the vacuum system,” Gagnon said. “If we’re building the full conveyor system, it’s on us to make sure all the working parts work together and they all fit. Before the customer ever receives it, we’ve tested it and made sure it does. That takes all of the risk and obligation and time and money off the equipment engineer, and puts it on us.”

In addition to design and full conveyor construction, Belt Technologies offers Teflon and silicone coating on its metal belts. The coatings provide qualities needed for certain conveyor applications. Teflon provides a non-stick surface  in high-temperature applications. Silicone offers high release, but also a high-friction surface so that products on the conveyor don’t slide off.