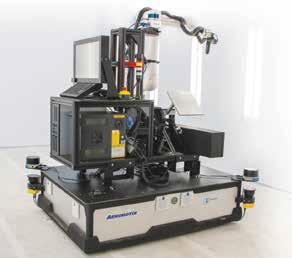 HUNTSVILLE, Ala.—An adaptive radome diagnostic system, reported to be the first use of a collaborative mobile robot in Air Force maintenance depots, has earned Compass Technology Group (CTG) a 2021 Defense Manufacturing Technology Achievement Award (DMTAA), according to a release from Aerobotix.

Compass Technology Group is an Atlanta-based provider of equipment for radio frequency (RF) materials measurement. The company engaged Aerobotix, an AS9100 certified FANUC robotics integrator and metrology company, as a key partner in building the system.

Aerobotix designed and built a system that features a FANUC CRX-10iA collaborative robot, which rides on a custom automated guided vehicle (AGV) and uses LiDAR to scan the work zone for safe navigation. The robot finds and orients to the part, adjusts the scanning paths, and executes detailed part analysis, according to Aerobotix.

“This dramatic technology leap has enabled us to deploy laboratory precision in an Air Force manufacturing environment,” said John Schultz, Ph.D., and chief scientist at CTG, in a statement. “Combining our sensors and algorithms with Aerobotix’s automation system has moved us from literally tapping a penny while listening for substrate damage, to instead quantifying microwave performance with self-navigating LiDAR on a mobile base with a FANUC collaborative robot. Our robotic microwave NDE system will put better parts back in the air, quicker and at less cost.”

“Aerobotix is extremely proud and honored to have assisted Compass Technology Group in this endeavor,” said Josh Tuttle, business development manager at Aerobotix, in the release. “This truly is an example of Industry 4.0, as these self-navigating robots can be rapidly repurposed to serve multiple objectives, and in multiple locations. From a quality control standpoint, this technology could be used to save substantial amounts of money for organizations and further increase means of production and manufacturing.”

The DMTA Awards are given annually to teams comprising government, industry, and academia employees who are responsible for outstanding projects in manufacturing technology. The projects must demonstrate technical accomplishments and provide a responsive world-class manufacturing capability that affordably meets the warfighter’s needs throughout the defense acquisition lifecycle, according to the release.

“Aerobotix is perhaps best known for robotic painting, but this award for our work with CTG highlights our expertise in metrology and navigation systems,” Tuttle added. “We are a reliable automation integrator for the aerospace industry and excited to partner with other companies on future projects.”