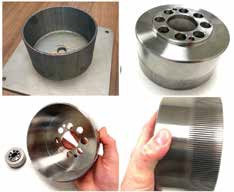 Additive manufacturing was used to produce a 6-inch diameter strain wave gear flexspline from 17-4 PH steel. The part was manufactured using directed energy deposition and then precision-machined into the final shape. The prototype is compared to a common size-20 flexspline measuring approximately 2 inches in diameter. For larger flexsplines, additive manufacturing can provide significant cost savings and open the ability to tailor material properties. (Image courtesy Amorphology)

PASADENA, Calif.—NASA spinoff Amorphology Inc. is partnering with Additive Technologies (AddiTec) to develop technology for additive manufacturing of large steel strain wave gear flexsplines, Amorphology said in a release. Through their combined efforts, the two companies have demonstrated a 6-inch diameter prototype of a strain wave gear flexspline that is printed in high-performance 17-4 precipitation hardened steel.

Strain wave gears are compact, zero-backlash gearboxes used in robotic arms and precision-motion mechanisms. They transmit torque through a geared thin-walled cup, hat, or band, called a flexspline. The flexspline has precise gear teeth and a flexible wall, a combination of qualities that drives the manufacturing costs of a strain wave gearbox.

Because of their complexity, strain wave gears can account for a substantial portion of the cost of a six-degree-of-freedom (6DOF) robotic arm, according to Amorphology.

“When you look at machining of flexsplines that are 6 to 8 inches in diameter, the large steel feedstock may be reduced to as little as 10 percent of its original volume,” said Dr. Glenn Garrett, chief technology officer at Amorphology, in the release. “This is a detriment from both cost and sustainability standpoints, as energy and material are wasted to produce a part which is a shell of the original stock.  Additive manufacturing becomes a promising alternative since the machining costs can potentially be dramatically reduced while allowing for the cost-effective use of high-performance steels.”

The prototype demonstrated by Amorphology and AddiTec was fabricated on a Haas CNC hybrid system running the Meltio Engine. The printed part was removed from the build-tray and then CNC machined into the precision shape. The process is said to permit flexible and on-time production of a variety of large flexsplines without having to keep many diameters of stock in house, according to the release.

“We are thrilled to work with Amorphology and offer solutions to fabricate their parts by dramatically reducing the need for expensive machining,” said Additive Technologies Business Development Manager Yash Bandari, Ph.D., in the release. “We look forward to working together to drive innovation.”

Amorphology was founded from technology developed at the Jet Propulsion Laboratory (JPL) and the California Institute of Technology. Additive Technologies (AddiTec) is a founding partner of Meltio, an additive manufacturing company that develops metal 3D printing systems.

“AddiTec uses Meltio’s Laser Metal Deposition with wire and/or powder (LMD-WP) technology (a form of DED), said Brian Matthews, CEO of AddiTec, in the release. “In the LMD-WP process, lasers create a melt pool in which wire and/or powder is fed to create weld beads. These weld beads are then layered precisely to fabricate near-net shaped metal components.

“This technology can be used to create components from a CAD design or for part repair,” Matthews continued. “In addition, the ability to integrate with a CNC machine makes it a hybrid system. Hybrid manufacturing is a ‘one-stop solution’ for seamless metal component production. It combines both additive and subtractive operations on one common platform, thereby reducing the overall cost and time for fabricating components.”

The two companies plan to develop this technology and expand their partnership to multi-material and functionally graded material flexsplines, which cannot be produced conventionally, Amorphology said in the release.