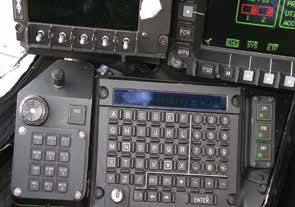 A currently fielded teaming capability provides the crew of an AH-64E Apache with full-motion video and multiple levels for controlling a UAS while balancing the demands of flying the aircraft. Complex systems such as this could benefit from better human/machine interfaces that lower the training requirement. It’s a priority for the Defense Department. (Photo by AMRDEC)

A modern-day cell phone packs quite a wallop when it comes to computing technology and capability. But most cell phones barely come with a “quick start guide,” let alone an instruction manual that spells out how to use all the features.

Cell phone companies have mastered the interface between humans and technology, making their use entirely intuitive and rendering thick instruction manuals a thing of the past.

The same thing should be happening for weapons systems used by servicemembers, Heidi Shyu, who serves as the undersecretary of defense for research and engineering, said. During a virtual discussion [on January 19, 2022] with the Potomac Officers Club near Washington, D.C., she said intuitive, easy-to-use human/machine interfaces are something that’s a priority for her and the Defense Department.

“When I [served as an executive for the] Army before, one of the experiences I learned is with a lot of our weapons systems, you really have to have a manual and go through weeks of training, if not months and years, to be proficient, which is ridiculous,” she said. “[Weapons systems] ought to be designed with the appropriate ease-of-use human/machine interface, so it will become much more intuitive.”

As the Defense Department’s chief technology officer, Shyu said she’s interested in developing better ways to simplify the way service members use the technology they are given in order to reduce the training burden and learning curve.

“I really would like to see how we can change our weapons systems’ human/machine interface to be a lot more intuitive, to ease the amount of training that’s required,” she said.

For most service members, combat means use of a weapon such as a rifle, an aircraft that can drop a bomb or launch a missile, or a ship or tank that fires a large gun that requires a round to be loaded. All of these kinetic weapons systems fire solid projectiles which need to be carried along with warfighters, and which may eventually run out. But a new generation of weapons systems, which uses directed energy rather than expendable ammunition or ordnance, is on the horizon, Shyu said.

“In the area of directed energy, we’re … finally at the cusp of developing laser technology,” she said. “After 30 years, we’re finally getting to the point of fielding the prototypes. So I’m thrilled. Army and Navy are [both] fielding laser systems. I’m really happy to see that. We’re also developing high-power microwave systems as well.”

A circuit board. Microelectronics are critical to U.S. defense. (Photo by C. Todd Lopez, DoD)

The Optical Dazzling Interdictor, Navy program, or ODIN for short, is a nonlethal weapons system used to confuse and perhaps render harmless an enemy drone — rather than shooting it down.

The ODIN system is already installed on multiple Arleigh Burke-class guided-missile destroyers within the Navy’s fleet, and there are plans to install additional systems as well.

The Army is also developing several directed energy systems. One of those is the Directed Energy Maneuver-Short Range Air Defense, or DE M-SHORAD system, which involves a 50kW-class laser to protect divisions and brigade combat teams from unmanned aerial systems, rotary-wing aircraft, and threats from rockets, artillery, and mortars.

The department is also interested in the development of advanced materials, Shyu said.

The department is also doing its part to bring the manufacture of microelectronics back to the U.S. to improve supply chain reliability, Shyu said.

“You guys have all heard about the situation that we’re in with the supply chain, where 70 percent of our chips are coming from Asia,” she said. “That poses a supply chain risk. You can see there’s a lot of interest on the Hill in terms of helping out the microelectronics foundries to try to onshore some of the capabilities.”

Shyu said the Defense Department is working closely with the Department of Commerce and with foundry companies to make that happen.

“We also work very closely with intelligence communities to make sure we understand all the needs and figure out how we can leverage commercial processes which can evolve at a much faster rate than just the defense-unique foundry,” she said.

Finally, Shyu said, the department is interested in having the U.S. take the lead on the development of 5G technologies — and the advancement of the next-generation of radio communications as well.

“I call it the ‘next G’,” she said. “Namely, beyond 5G. What I don’t want to happen is for us to take our eyes off the ball and play catch-up. I’m interested in making sure we’re developing technologies on 6G and 7G, so we, the U.S., can shape the standards, as opposed to some other country shaping the standard and us playing catch-up.”

Republished with permission of U.S. Department of Defense News.