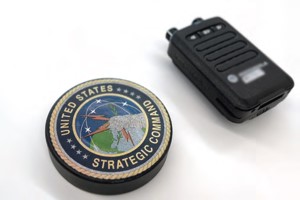 AUSTIN, Texas—Although many businesses and organizations are well along the path of the IoT and industrial internet of things (IIoT), others continue to struggle to generate value quickly and cost-effectively from the technology. But help may be on the way.

IoT/AI, a three-year-old team of sensor, network, and AI experts, is emerging as an IoT solutions provider for numerous markets, including extreme military use cases. The Austin-based startup reported that it recently secured a contract with the U.S. Air Force’s Global Strike Command (AFGSC) by answering a call to assist in emergency aircrew response.

IoT/AI is developing the Pico Personal Communicator, reminiscent of the Star Trek communicator and beaming device. The company adapted its commercial technology from an existing 14-ounce black box into a wearable patch-like device that provides alerting, audio commands, and acknowledgement capabilities, IoT/AI said in a release.

The transformation of the product took less than five months and will now go on to second-phase prototyping by IoT/AI before potentially becoming a part of a program of record.

“We are developing the most secure and resilient small and wearable intelligent edge system on the planet,” said IoT/AI Chief Executive Officer Kevin Montgomery, Ph.D., in the release.  “This project with STRIKEWERX allowed us to accelerate a pioneering technology that helps users stay connected and on task — even in high interference and degraded conditions.”

If successful, IoT/AI’s technology could revolutionize existing 1980s technology used by the Air Force and redefine how aircrews are notified of emergencies, according to STRIKEWERX, the innovation arm of the AFGSC Office of the Chief Scientist that hosted the “Emergency Aircrew Response Challenge.”

The IoT/AI device uses its unified, secure platform to enable connectivity, collaboration, and AI-based data analysis in the most extreme environments. That’s what makes this commercial technology adaptation optimal for expanded military use cases, the company said.

“We already have customers asking us to further adjust and refine this hands-free set of communication, location, sensing, and AI-based self-healing systems to tackle other sustainment, tactical, and logistics use cases,” said IoT/AI Chief Operating Officer J.D. Stanley, in the release.

Prior to the tech connection with AFGSC, IoT/AI’s founders worked for more than 20 years in geospatial analytics, artificial intelligence/machine learning, sensor networking ranges, applied digital swarming, and edge tech survivability. Their experiences include some of the harshest conditions and environments in the world.

Now, as they leverage that experience with their time at Cisco, NASA, Stanford University, and HP, the company’s founders say they are emerging as a solution provider for today’s military challenges.

“Years ago, while at Stanford, I recognized the need to combine silos of technology into an integrated intelligent system that is simple to use. The Pico Anywhere Suite™ of systems are the result and answered the call for the Air Force,” Montgomery said.

“We have a passion for the mission and are engaged across Air Force, Army, Navy, Marines, and Special Operations Command to identify use cases where our dual-use, commercial-off-the-shelf-based technology can help deliver on the internet of battlefield things (IoBT) in the near term,” added Stanley. “Well before the 2028 requirements.”

IoT/AI’s experts have “a passion for getting customers to the edge faster, including in extreme use cases for the internet of battlefield things,” the company said. Their experience is said to include hardware, firmware, software, radio frequency, cybersecurity, AI/ML, cloud/SaaS, and ATAK/cursor-on-target.