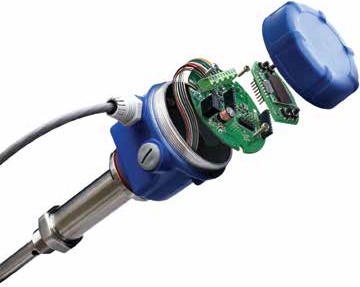 The L96 Series Capacitance Level Transmitters can be custom engineered during production to meet enclosure and environment requirements. They can operate in temperatures up to 392°F and in pressure environments up to 500 PSIG, according to Whitman Controls. (Image: Whitman Controls/PRNewswire)

Whitman Controls’ new transmitter can be custom engineered during production to meet enclosure and environment requirements.

The company describes them as innovative devices that are well-suited for water systems, oil and petroleum tanks, chemical processing, refrigeration systems, and numerous other OEM applications where precise level measurement and real-time data communication are critical.

The fully configurable L96 Series transmitters come standard with an OLED display and Modbus RS485 protocol. Users can select from a variety of analog outputs in the field, ranging from 0-5V to 1-5V, 0-10V, and 4-20mA. Users can also simultaneously configure an SPST latching relay for switching functionality at any desired setpoint on the measurement range, the company said in the release.

The L96 Series Capacitance Level Transmitters can be custom engineered during production to “meet any enclosure and environment,” the company said, with the ability to operate in temperatures up to 392°F and in pressure environments up to 500 PSIG.

“The L96 is a highly versatile device affording users numerous customizable options at production combined with full-field adjustability, delivering ultimate operating flexibility across a wide range of applications,” said William Brame, president of Whitman Controls, in the release. “We are actively testing our L96 units in numerous applications and are excited to see further adoption in other industries in the near and medium term.”

Whitman Controls is ISO 9001, UL, and CE Certified. The company said that during its more than 50 years of operation, it has worked closely with design engineers “at thousands of OEM companies globally to develop unique sensor solutions across numerous applications and industries.”

Gowanda Electronics Recognized by Collins Aerospace as Supplier of the Year for Electronic Components, Distribution