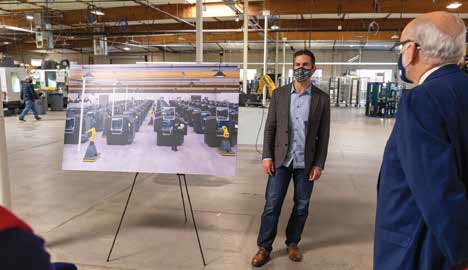 Joined by Torrance Mayor Patrick Furey, 3DEO Co-founder and President Matt Sand spoke in detail about 3DEO’s award-winning, proprietary 3D printing process, a platform the company has been developing quietly for the past five years.

“Until now, we have revealed very little about our patented technology, and for good reason—we felt we had a tiger by the tail and wanted to gain as much advantage as possible,” Sand said in a release. “But when our CTO [Payman Torabi] and his team put the final touches on our next generation printer, we looked around the table and agreed it was time to show the world what we are building.”

Sand proceeded to explain 3DEO’s origin story, and its early vision to invent a 3D printing technology that was not only fundamentally different from anything else in the industry, but made it possible to break into mass production, which has been so elusive to the 3D printing industry. The result was a ground-breaking system built to democratize the manufacturing process and do for product innovation what the PC did for computing.

3DEO’s metal 3D printing process is reported to boast more than 20 issued or pending patents in 3D printing, robotics, software, and automation. It is said to achieve superior results, especially for surface finish, material properties, and dimensional accuracy. But 3D printing’s digital nature, on-demand flexibility, and quick-turnaround processes take this service bureau’s partnership capabilities far beyond being a parts supplier, the company said in the release.

“Simultaneously working hand-in-hand with production customers, we learned very quickly that the printer is actually only a small piece of the puzzle when it comes to mass production,” said Sand. “In fact, everything up and down the production line affects our ability to win in the marketplace. So we gradually expanded scope from being focused only on the metal 3D printing technology to innovating up and down the entire production line.”

It was with this broad, holistic perspective that 3DEO’s digital end-to-end platform, the Manufacturing Cloud™, was conceived, with its new Saffron platform representing what the company called “the mass production breakthrough the industry has been waiting for.”

Following a grand curtain unveiling of the Saffron printer, the press conference closed with the premiere of 3DEO’s “How it Works” video, outlining the firm’s proprietary process in greater detail.

“Imagine a world in which new products can be launched at the speed of software–in months, not years; and for thousands of dollars, not millions,” concluded Sand. “Digital manufacturing, with 3D printing as the beating heart of the factory, will create this paradigm shift. This previously unimaginable manufacturing capability will level the playing field for all engineers, and this exciting vision for the future of manufacturing will become a reality through 3DEO’s Manufacturing Cloud that we are building right here in Torrance, California.”

3DEO is on track to bring 125 of these next generation printers into its Torrance headquarters over the next three years, the company said.