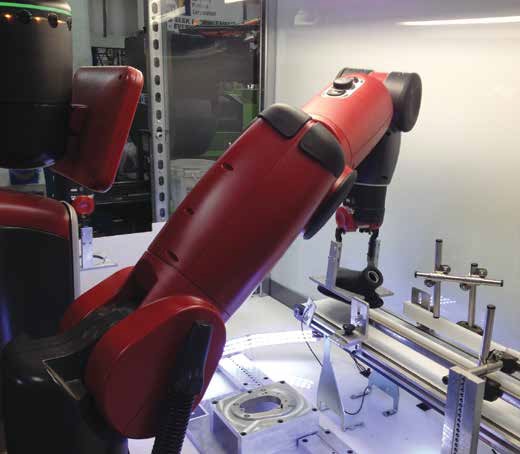 Robots seen as key to manufacturing’s return and survival

The International Federation of Robotics (IFR) reported operating industrial robots hit an all-time record of 3 million units worldwide, growing at an average rate of 13 percent a year with a list of 2022 trends including robots being adopted by new industries.

“For North America, among those new industries certainly were the food and beverage industry, the pharmaceutical and cosmetics industry and the electrical/electronics industry,” said Susanne Bieller, Ph.D., and general secretary of the International Federation of Robotics, in an e-mailed response to D2P. The IFR is based in Frankfurt, Germany, with 75 members in 20 countries, including manufacturers, robotic manufacturers, national and international trade associations, and research and development institutes. “More and more companies are realizing the numerous advantages robotics provide for their businesses.”

Bieller said numerous economic trends are driving the rapid adoption of robots, including supply chain disruptions, labor shortages, the need to lower costs, and the desire for higher quality. Political disruptions in Europe are playing a role.

“Labor shortages and supply chain issues being the key drivers,” Bieller said. “The labor shortage is certainly a huge issue for the U.S. manufacturing, but also increasingly for sectors like restaurants and e-commerce.”

Bieller said the supply chain problems were first triggered by the pandemic and then by a series of geopolitical factors.

One Connecticut manufacturer, Chris Budnick of Vanguard Plastics Corp., said automation and robotics are key to making North American manufacturing competitive, and the reshoring trend of bringing back U.S. manufacturing to the U.S. started before COVID-19. He said Covid added fuel to that fire, but the war in Ukraine threw gasoline on the fuel.

“For the large corporations, Ukraine is bringing the reshoring trend into sharp focus. It accelerated the process that started before COVID, before Ukraine. They figure it’s better to pay more in a friendly country,” Budnick said. Part of that trend is learning how to improve the company’s manufacturing processes. “Our customers are asking us to do more. They want an entire subcomponent. We have to figure out an entire assembly.”

Bieller said growing robotic types include articulated robots, including cobots (those that can work safely next to people) that are used in handling and machine tending, for welding, painting, assembly, and for use in cleanrooms. She said mobile robots are gaining ground by moving materials on factory floors, to assist pickers in e-commerce and in service sectors to support trained staff.

The IFR identified five specific robot trends for 2022. Robots will be adopted by new industries. Robots will be easier to use. Robots and humans are “upskilling.” Robots secure production. Robots support digital automation.

“For North America, among those new industries certainly were the food and beverage industry, the pharmaceutical and cosmetics industry, and in the electrical/electronics industry,” Bieller said. Bieller said a byproduct of using robots is higher quality and repeatability, as is “lower cost on the long run, after the initial investment has paid off.”

“Even if you have robots, you still have to have employees to load or unload the machines or program the machine. It’s not reducing your headcount. It’s upskilling your employees,” said Mary Fitzgerald, president of Acme Wire Products Co., Inc. Fitzgerald said a company deciding to buy a robot has to think about what they want it to do, how to program it to accomplish the goal, and how easy programming is. The company must consider its staff and their abilities. “You look at where you’re going to use it, can you justify the cost, are people going to be able to manipulate it? You have to find the right mix.”

At Acme, a robot stretch wrapper will wrap a pallet loaded with parts instead of asking a person to walk around the pallet in a circle and wrap it with plastic by hand. “You can relocate those employees to different tasks,” Fitzgerald said.

Other robots are used in wire forming, in arc welding, and in jig welding. Acme, of Mystic, Connecticut, is a custom wire former and fabricator making precision components, parts, and products.

Fitzgerald said a customer might approach Acme Wire and ask Acme to expand its reach. Can Acme make a new system, new equipment, or a prototype? “It’s very project-based. It’s not a regular project as though they’d want so many a month or so many a year.”

Some customers make equipment for use by robots or on robots. A customer might approach Acme to make a fixture. “That’s how we get into different industries, when they specify a fixture for their equipment, a basket, or handling equipment.”

Fitzgerald estimated Acme has 10 to 12 pieces of robotic or automated equipment. It employs just under 50 people, and that has remained constant for the last three years.

Fitzgerald agreed with several of the IFR’s trends. She said robots are getting easier to use, both robots and her employees are upskilling, and digital automation is expanding.

That is the fifth trend observation the robotics federation made for 2022. Robots are contributing to the digitalization of manufacturing.

Budnick said his Wittmann equipment on his shop floor is connected to Wittmann. “We have service techs in Austria working to sort out what’s wrong with our machines. They dial in and they can change the software.”

“It’s a sea change,” Budnick said. “You see it in every device in your house. It’s advancing the industrial world as well. Everything is connected today. Robots help us stay competitive. All of our molding machines and most of our robots are connected to the internet. That’s just doing business today.”

Vanguard is a high technology custom injection molding manufacturer. Vanguard bought a Rethink Robotics Baxter Robot, then a second, using them to package medical products. It then bought three more, and wore all five out from hard work. “We knew it might happen. That robot wasn’t built to last for 60,000 hours or 100,000 hours in an industrial setting,” Budnick said. He is planning to buy an industrial robot soon, either an ABB product or more likely a Fanuc.

“They (the customer) can monitor the process live,” Budnick said. “They can offer software changes live. Signals are passed back and forth from the robot to the injection molding machine to the assembly machine.

“Robots are a matter of survival. It’s how we stay profitable. It’s how we prosper,” Budnick said. “It’s a bridge for bringing manufacturing back here.”

Largest U.S. Automaker Plans to be Carbon Neutral by 2040