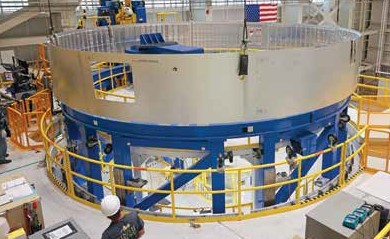 The NASA-built hydrogen tank barrel that would later be tested as a weld confidence article for the SLS rocket’s Exploration Upper Stage. (Photo courtesy NASA)

WASHINGTON, D.C.—In April, NASA reported that it completed manufacturing of a hydrogen tank barrel that would later be tested as a weld confidence article for the Space Launch System (SLS) rocket’s Exploration Upper Stage (EUS).

Weld confidence articles help establish welding procedures and interfaces between the tooling and hardware and ensure the structural integrity of the welds. Starting with the Artemis IV mission, the EUS will provide the power to send astronauts in NASA’s Orion spacecraft and heavy cargo on a precise trajectory to the Moon, NASA said in a release.

After NASA and lead contractor Boeing completed manufacturing of the test tank barrel at NASA’s Michoud Assembly Facility in New Orleans, technicians moved  it from the Vertical Weld Center, where it was built, to the Vertical Assembly Center for further processing. There, engineers cut the barrel into small sections for mechanical testing and analysis that will help verify the parameters that will be used to build the rocket stage, according to the release.

For NASA’s first three Artemis missions, the SLS rocket will use an interim cryogenic propulsion stage with one RL10 engine to send Orion to the Moon. The Exploration Upper Stage will be used on the rocket’s Block IB evolved configuration for flights beyond Artemis III, NASA said.

The upper stage has larger propellant tanks and four RL10 engines. The evolution of the rocket to SLS Block 1B configuration with EUS is said to enable SLS to launch 40 percent more cargo to the Moon, along with the crew. The SLS is reportedly the only rocket that can send Orion, astronauts, and heavy cargos to the Moon in a single mission. The SLS rocket, NASA’s Orion spacecraft, Gateway, and commercial human landing systems are “part of NASA’s backbone for deep space exploration,” according to the release.

NASA said that through the Artemis missions, it will land the first woman and the first person of color on the Moon, paving the way for a long-term lunar presence and serving as a steppingstone on the way to Mars.

What is the Exploration Upper Stage?

To send NASA’s Orion spacecraft and heavy cargo to the Moon for the Artemis lunar missions, the Space Launch System (SLS) rocket delivers propulsion in stages, NASA explained in a release. At liftoff, the core stage and twin solid rocket boosters fire to propel the rocket off the launch pad send it into orbit. Once in orbit, the upper stage provides the in-space propulsion to set the spacecraft on a precise trajectory, according to the release.

While the rocket’s core stage design will remain the same for each of the Artemis missions, the rocket’s upper stage is selected to meet various mission requirements and goals.

In a separate release, NASA said that assembling the 5.5-million-pound SLS rocket for the Artemis missions requires special tools and is a collaborative effort between NASA and Boeing, the lead contractor for the core stage.

Engineers used a friction stir welding process to weld the core stage structures for the Artemis III mission. Each of the structures for the core stage has rings that attach the pieces together to produce one stage during final assembly. The rings were trimmed down to 1/1000th of an inch at the ring machining center, then sent to another part of the facility for the next phase of manufacturing, according to the release.