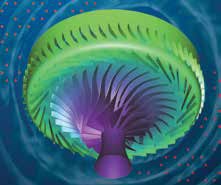 Engineers can use Cadence® Fidelity™ CFD Software to address wind noise around road vehicles and expand the flight envelope of next-generation aircraft designs. They can also use it to optimize power generated by wind and gas turbines, and cut fuel consumption of marine vessels—all while maintaining high accuracy and dramatically reducing turnaround time, according to Cadence Design Systems. (Graphic: Business Wire)

Engineers can use the software to address wind noise around road vehicles, expand the flight envelope of next-generation aircraft designs, optimize the power generated by wind and gas turbines, and cut fuel consumption of marine vessels. All of this is possible while maintaining high accuracy and dramatically reducing turnaround time, the company said in a release.

In one case, Fidelity CFD software’s unified mesh generation technologies from NUMECA and Pointwise are said to have delivered critical capabilities to a major aerospace customer.

“Fidelity CFD significantly improves fluid dynamics performance and accuracy across all industry verticals,” said Tom Beckley, senior vice president and general manager of the Custom IC and PCB Group at Cadence, in the release. “For advanced applications that need to accurately model turbulence, including automotive, turbomachinery and aerospace applications, the Fidelity CFD software’s next-generation flow solver opens new opportunities for customers to rapidly garner unprecedented engineering insight into the performance of their systems.”

According to Cadence, Fidelity CFD software’s next-generation, high-order flow solver offers advanced simulations of fluid turbulence and has demonstrated the ability to predict aerodynamic drag on an automobile up to 10 times more accurately than a traditional CFD solver. The turnaround time for these highly accurate simulations can be reduced from weeks to a day or less, the company said.

Geometry and meshing can consume up to 75 percent of a CFD engineer’s time. Fidelity CFD is said to build upon a long tradition of innovation and turnaround time reduction in these areas. The release of Fidelity Pointwise Meshing accelerates the technique used for meshing the flow field around commercial and military aircraft and space launch vehicles by up to three times, according to the release.

“We chose NUMECA Autoseal and Hexpress to be our standard workflow for CFD preprocessing,” said Antoine Delacroix, manager of vehicle performance engineering R&D at Toyota Motor Europe, in the release. “They allowed us to reduce our total lead time and work hours respectively by 91 percent and 97 percent, while consistently providing high-quality meshes with excellent layer coverage. Due to the high level of automation and standardization, creating a mesh from CAD does not require long pre-processing training.”

“Although AC75 yachts spend most of their time flying above the water, we saw in AC36 that the race can all be decided in the acceleration and takeoff phases,” said Dan Bernasconi, technical director at America’s Cup champion Emirates Team New Zealand, in the release. “Having a hull design optimized for hydrodynamic efficiency in takeoff and touchdowns is crucial to winning the America’s Cup, and at Emirates Team New Zealand, we rely on Cadence’s Fidelity Marine Solver to predict this performance. Fidelity Marine is the leading simulation tool for hull hydrodynamic modeling and forms an important part of our tool suite.”