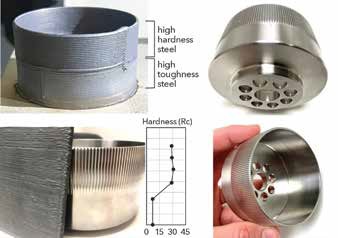 Additive manufacturing was used to produce a 3-inch diameter strain wave gear flexspline using a multi-material printing strategy. A wire-fed DED is used to produce a thin-walled cup blank with highly machinable steel, which then functionally grades to high-strength steel in the teeth. The printed part is machined into the final flexspline, which comprises both materials in a single part. (Image courtesy Amorphology)

A flexspline demonstrator, 3 inches in diameter, is part of a zero-backlash strain wave gearbox used in robotic arms

PASADENA, Calif.—Amorphology Inc. is partnering again with Additive Technologies (AddiTec). This time, the companies are workingto develop the additive manufacturing of multi-metal gear components for robotics, according to a release from Amorphology.

Amorphology was founded from technology developed at the Jet Propulsion Laboratory (JPL) and the California Institute of Technology. Additive Technologies (AddiTec) is a founding partner of Meltio, an additive manufacturing company that develops multi-metal 3D printing systems.

The partnership between the two companies builds on their previous collaboration to 3D print large-scale strain wave gear flexsplines in steel, using directed energy deposition (DED). It will focus on development of multi-metal, functionally-graded gear components that combine two different steels within a single part, Amorphology said in the release.

According to Amorphology, the demonstrator is a 3-inch diameter flexspline that is part of a zero-backlash strain wave gearbox used in robotic arms and precision-motion mechanisms. The thin-walled flexspline is subject to competing requirements: wear resistance in the teeth and a fatigue-resistant body that motivates the use of two different materials during 3D printing.

The steel in the toothed region is a precipitation hardening, martensitic stainless steel, typically used in high-strength applications, with an average hardness of 35 Rc. In contrast, the steel below the toothed region is known for high toughness with a lower average hardness. By combining the two steels strategically in a gear, it becomes possible to tailor the mechanical properties to take advantage of the benefits of each alloy, the company said in the release.

Through its exclusive licensing agreement, Amorphology is developing its intellectual property around multi-metal 3D printing—specifically, functionally graded metals. This allows for the strategic transition between more than one metal during 3D printing to produce multi-functional parts that are free from cracks and unwanted phases, the company said.

The core technology, developed over a decade ago at JPL, focuses on the design of multi-metal transitions to achieve predictable mechanical or physical properties in the printed part. Unlike conventional claddings or overlays, functional grading aims to achieve the best possible properties at the interface between dissimilar metals or composites in a 3D printed part. This helps to prevent failures, such as those caused by thermal mismatch or fatigue cracks. Tailoring the interface between different metals during printing can be achieved through diffusion at the interface by allowing the disparate metals to mix, or by adding one or more intermediate compositions at the transition, according to the release.

“Meltio’s dual-wire DED technology provides an ability to change from one material to another material automatically during the fabrication of metal components,” said AddiTec Business Development Manager Yash Bandari, Ph.D., in the release. “This results in gradual change in properties and functions, which can be tailored for enhanced performance.”

The prototype developed in the current partnership was produced through wire-fed DED by printing the base of the gear from high-toughness steel, and then sharply transitioning to the high hardness steel at the vertical location where the teeth begin, using the melt pool to diffuse the layers. The materials also could have been transitioned by mixing powders of the two materials in the powder-blown configuration of the DED printer, the company said.

“Functional grading with multiple materials allows us to develop gear components for robotics that cannot be fabricated with conventional metallurgy,” said Amorphology Chief Technology Officer Glenn Garrett, Ph.D., in the release. “The ability to tailor the properties of a gear via alloy composition gives us an entirely new design freedom when developing precision mechanisms.”

The multi-metal flexspline demonstrator from Amorphology and AddiTec is designed so that the high-performance, high-hardness steel resides in the gear teeth, and the rest of the cup is made from highly machinable tough steel. The as-printed hardness of the gear teeth, achieved through DED, was measured to be approximately 30 Rc; the base of the cup measured approximately 7 Rc (87 Rb). A further increase of the gear teeth hardness is possible through subsequent heat treatment, according to the release.

“Whether it’s improving the wear resistance of gear teeth while maintaining toughness in the rest of the part, or using high-value steel in combination with low-cost steel to save cost, multi-material additive manufacturing is allowing us to innovate in the way that we approach gears for robotics,” Garrett continued. “We can tailor properties for machinability, cost, hardness, strength, corrosion resistance, even density. For large gears, where it makes sense to use additive manufacturing to save machining costs, this could be a real advantage.”

Future work will focus on different combinations of steels and the development of localized heat-treating strategies to optimize the properties of each metal in the bi-metallic gear. Amorphology said it is actively developing other applications for functionally graded metals in such applications as thrusters, rockets, robotics, and gears, and is seeking partners for further development and licensing.

To learn more about this project, contact Peter Czer at Amorphology by phone (310-560-7793) or email (peter@amorphology.com).