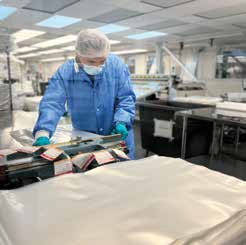 A technician at work at Cleanroom Film and Bags. (Photo: Business Wire)

PLACENTIA, Calif.—Cleanroom Film and Bags (CFB), a division of C-P Flexible Packaging, reported it has expanded its manufacturing footprint with a new solar-powered and ISO-certified facility in Placentia, California. The modernized facility features ISO-certified cleanrooms with environmental monitoring climate systems and a fully equipped laboratory, CFB said in a release.

The expansion allows CFB to meet increased demand for high-quality, certified cleanroom packaging for a growing customer base while remaining true to its 100 percent American-made commitment, the company said.

Cleanroom Film and Bags’ sterile packaging is manufactured within controlled cleanrooms, processed from raw materials to a finished, vacuum-sealed product without ever leaving the cleanroom environment. Ten extrusion blown film lines are integrated with the cleanrooms’ converting equipment. This unique process maintains a superior level of cleanliness, according to CFB.

The new facility also highlights CFB’s commitment to sustainability, the company said. With 440 solar panels, the plant is reportedly one of Orange County’s largest solar deployments, generating one-third of the cleanroom facility’s energy.

“We are very excited about this expansion, which enhances our capacity and speed-to-market,” said CFB General Manager Jaime Read, in the release.

“This new facility allows us to continue to meet the demand of our clients, stay at the forefront of cleanroom innovation, and demonstrate our commitment to environmental responsibility,” Hoffman said.

Cleanroom Film and Bags said it is a trusted supplier of sterile cleanroom packaging manufactured within custom-built cleanrooms for numerous markets, including the medical, pharmaceutical, electronics, aerospace, semiconductor, luxury goods and food industries.

C-P Flexible Packaging, founded in 1958, is a manufacturer of flexible packaging that supports  the growth efforts of some of the world’s leading consumer packaged goods companies. Headquartered in York, Pennsylvania, C-P operates 10 manufacturing plants across North America and employs more than 1,000 people, the company said.

Benefits of Forging as a Fabrication Technique to Boost Market Growth, Report Says