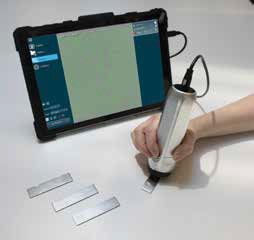 GelSight Mobile 2.4 enables users to evaluate the depth and coverage of shot peening to determine whether parts have been sufficiently treated to achieve a desired level of strength. (Photo: Business Wire)

GelSight is a developer of digital, imaging-based tactile intelligence. Its proprietary technology, created at MIT, is said to provide extremely detailed and rapid surface characterization. As a result, it enables “several surface measurement applications and robotic sensing capabilities,” according to the release.

Users of GelSight Mobile 2.4 have access to a number of new surface analysis capabilities, including shot peening measurement and enhanced pit detection. It’s now possible to evaluate the depth and coverage of shot peening to determine whether parts have been sufficiently treated to achieve the desired level of strength. Users can also set minimum and maximum pit depths and diameters, enhancing the capabilities of a pit detection algorithm based on input from customers that use pit detection for corrosion inspection, the company said.

The software also includes a new AI module that learns from the users’ behavior, observing  repetitive workflows to suggest automated settings that can help improve productivity, according to GelSight.

“After launching GelSight Mobile Series 2 late last year, we’ve continued to improve the capabilities of our system through software enhancements as we work with customers to identify new use cases for our tactile sensing technology,” said Dennis Lang, vice president of product at GelSight, in the release. “The new features in GelSight Mobile 2.4 will allow us to further penetrate industries such as aerospace and automotive, and to expand into new sectors such as military, power generation, oil and gas, and precision manufacturing, where shot peen process control and detection of pit defects are critical processes.”

According to GelSight, data captured by its elastomeric tactile sensing platform leverages proprietary software and algorithms to provide detailed and accurate surface characterization. This capability can generate significant gains in productivity on the production floor and in the field, while also reducing the costs associated with manual or tool-based visual inspection, the company said.

The handheld GelSight Mobile device can be deployed on production and assembly lines to enable rapid and well-documented quality assurance decisions. Dimensions of scratches, dents, hits, gaps, offset, texture, hole diameter, and fastener flushness can be measured in high-resolution and on any surface, under any lighting conditions, in seconds, according to the company.

GelSight’s elastomeric 3D imaging systems are currently used in aerospace, automotive, and forensics applications, as well as in robotic research labs throughout the world, the company said.

Siemens and NVIDIA Are Collaborating to Build an Industrial Metaverse