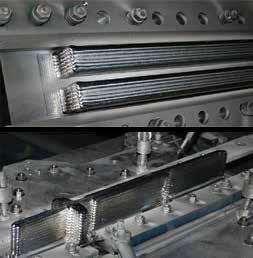 CHICAGO—Sciaky, Inc., a subsidiary of Phillips Service Industries, Inc. (PSI) and a major provider of metal additive manufacturing (AM) solutions, reported that its Electron Beam Additive Manufacturing (EBAM®) process deposited 40 pounds (18.14 kg) of titanium per hour. The achievement represents the highest and fastest deposition rate in the world for industrial metal 3D printing, Sciaky said in a release.

The Saint Exupéry Institute for Research in Technology (IRT), in France, achieved EBAM’s high deposition rate (HDR) while conducting work for its Metallic Advanced Materials for Aeronautics (MAMA) project. One of the initial goals of MAMA, according to the release, was to combine die forging with metal 3D printing to develop a new process for manufacturing titanium aircraft parts.

To date, Sciaky’s EBAM is reported to have deposited more than 330 lbs. (150 kg) of Ti-6AI-4V (titanium) for three different MAMA applications. Additional projects are planned for 2022 and beyond, with a groundswell of support to adopt these new processes into production. Airbus and Aubert & Duval are also key process contributors for this particular initiative of the MAMA project, the company said in the release.

“Sciaky is excited about EBAM’s new deposition rate milestone,” said Scott Phillips, president and CEO of Sciaky, Inc., in the release “We are committed to discovering new applications for EBAM that will help manufacturers save significant time and money on part production, as well as improve part quality.”

Sciaky described its EBAM systems as “a widely scalable metal additive manufacturing solution,” adding that they can produce parts up to 19 feet (5.79 meters) in length.

According to Sciaky, its EBAM process brings quality and control together with the Interlayer Real-time Imaging and Sensing System (IRISS®). This innovative closed loop control is reported to be the only real-time adaptive control system in the metal 3D printing market that can sense and digitally self-adjust metal deposition with precision and repeatability. It is also the primary reason that Sciaky’s EBAM 3D printing process is able to deliver consistent part geometry, mechanical properties, microstructure, and metal chemistry, “from the first part to the last,” the company said.