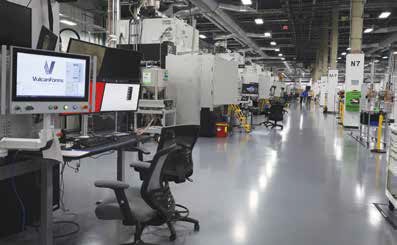 BURLINGTON, Mass.—VulcanForms, an MIT-born company that builds and operates advanced digital manufacturing infrastructure, is working to enable its customers in critical industries to accelerate innovation and shift away from dependence on overseas manufacturing.

The company revealed, in a release, its first two digital production facilities—in Devens, Massachusetts and Newburyport, Massachusetts—that are said to capture “the full value chain for precision metal components and assemblies.” It also reported it has raised $355 million and is now valued at more than $1 billion. “Manufacturing must catalyze innovation and sustainable economic growth in the United States,” the company said in the release.

The company’s Devens facility, VulcanOne, is powered by a fleet of VulcanForms’ proprietary 100-kilowatt class laser powder bed fusion additive manufacturing systems, which reportedly will total over 2 megawatts of laser capacity. Its Newburyport facility focuses on automated precision machining and assembly operations. VulcanForms said it merges these technologies with a digital thread to offer “groundbreaking, U.S.-based digital manufacturing infrastructure” to its customers.

According to the release, manufacturers perform nearly 60 percent of U.S. private sector R&D, and every dollar spent on manufacturing contributes an additional $2.79 to the U.S. economy—a higher multiple than that of any other industry. Manufacturing has raised the standard of living, quality of life, and life expectancy of virtually everyone alive today. It has driven innovation like no other industry.

Yet, manufacturing employment in the U.S. has dropped more than 40 percent since 1980, while wages and capital investment have been largely stagnant. Responsible for this catastrophic development are decades of offshoring, displacing critical manufacturing know-how and infrastructure to other countries. In many cases, this enabled access to lower-cost labor and expanded global trade, but ultimately hollowed out the domestic innovation ecosystem. While millions of manufacturing jobs were eliminated, supply chains became increasingly sensitive to geopolitical dynamics, the company said.

“By scaling advanced digital manufacturing, we can create a new era of U.S. innovation and economic growth,” said VulcanForms Co-Founder, President, and CEO Martin C. Feldmann, in the release. “We’ve recognized a game-changing opportunity when additive manufacturing technology is scaled for industrial production and is seamlessly integrated with automated machining and robotics.

“VulcanForms has built the physical infrastructure and digital workflows to deliver this full-stack manufacturing solution at unprecedented speed, precision, quality, and scale,” he added. “Our technologies, combined with our team of engineering and operations leaders from Google, General Electric, Pratt & Whitney, Precision Castparts, IPG Photonics, Faro Technologies, Schlumberger, Alcoa, and Autodesk, among others, enable our customers to innovate, grow, and deliver sustainable impact faster.”

VulcanForms’ customers include leading companies in the aviation, space, defense, medical, semiconductor, and other critical industries. For instance, the company said it supplies over a dozen U.S. Department of Defense programs, including the F35 Joint Strike Fighter and Patriot Air Defense System, has delivered thousands of components for the semiconductor industry, and is enabling innovation in medical implants.

By combining its breakthrough technology, a data- and simulation-based digital thread, and operational excellence, VulcanForms’ integrated approach reportedly enables its customers to innovate faster and produce more. But it does so without the need to make major capital investments and implement new manufacturing technologies from scratch, the company said.

“VulcanForms brings forth metal additive manufacturing as a scalable industrial process, and as a cornerstone of breakthrough digital production systems,” said VulcanForms Co-Founder John Hart, also a professor of mechanical engineering at MIT, in the release. “Integrated digital production facilities are critical infrastructure which will accelerate domestic and global innovation and draw top talent to the manufacturing sector.”

The VulcanOne facility in Devens combines VulcanForms’ proprietary additive manufacturing technology with a digital thread, spanning advanced simulation, in-process sensing, and machine learning algorithms that are said to ensure the highest level of quality and precision. In full, VulcanOne will be powered by a fleet of VulcanForms’ 100-kilowatt class laser printing systems, representing 2 megawatts of laser power, a capital investment exceeding $100 million, and more than 100 new manufacturing jobs on site, according to the release.

VulcanForms also seamlessly integrates additive production at scale with heat treatment, precision machining, assembly, and inspection. To this end, the company has expanded its capabilities through the acquisition of Arwood Machine Corporation in Newburyport, Massachusetts. This end-to-end approach enables VulcanForms to deliver engineered components and assemblies, designing and operating a digital-first process chain tailored to each customer’s needs, the company said.

“There is a fundamental shift in the ways manufacturers need to adapt to global supply chain challenges and the increasing demands for product design flexibility,” said Greg Reichow, partner at Eclipse Ventures and director of VulcanForms, in the release. “VulcanForms’ full stack approach to deliver an engineered solution, combining advanced additive and subtractive technologies merged through a digital thread, will revitalize U.S. manufacturing and hardware innovation. The technologies that enable this agile workflow will dramatically impact the way products are imagined, designed, built, and delivered for decades to come.”

For Maker of Tags and Labels, Sustainability Is Key to Operations