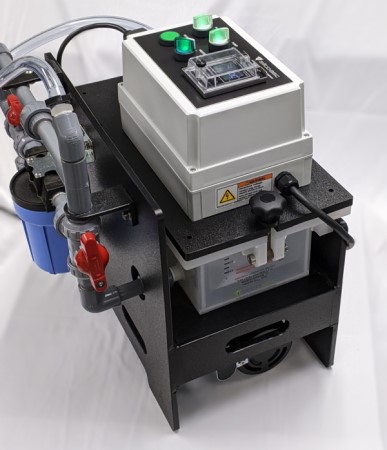 SIFCO ASC said the TechnoFlow units are designed to work with SIFCO Process® solutions that are best plated at an elevated temperature. The TechnoFlow 600 can hold more than seven liters of solution, and the 1200 unit has a solution capacity of up to 12 liters. Both sizes contain no fuses and have internal circuit breakers, as well as 24-volt finger-safe switches that meet UL and CE requirements, the company said.

One major improvement is the pump adapter plate. It is reported to provide better access to the frame mounting screws, making it easier to remove the large 14 GPM pump. Improvements were also made to the pump connector plugs. The new twist-lock system is said to ensure  a safe power connection and easy removal when needed.

The TechnoPlate is also now equipped with CPVC plumbing lines, providing both sizes a bypass filter and allowing technicians to change the filter mid-operation for large applications, the company said.

“As well as making the overall electroplating process more efficient and user friendly in the redesign, we improved the safety features for operators,” said SIFCO ASC Engineering Manager Derek Kilgore, in the release. “The system is now equipped with a PID temperature controller with auto-tuning functions, resulting in less overshoot of the set temperature, and has the ability to log temperatures throughout the operation for post plating review.”

The company said it has provided “practical, cost-effective brush plating solutions for OEM components and parts requiring refurbishment in the aerospace, oil and gas, general industry, and power generation sectors for over 50 years.”