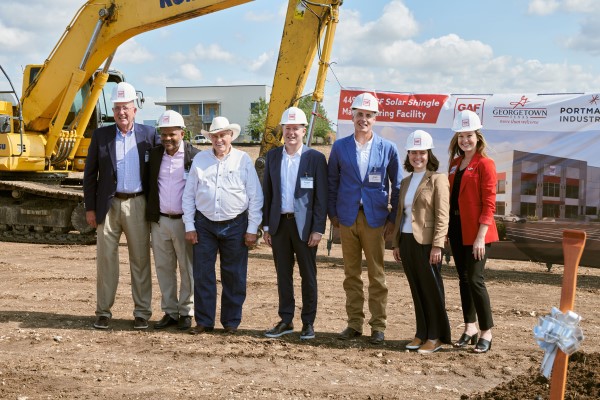 The company is building a 450,000-square-foot manufacturing facility to meet growing demand for its ‘nailable’ solar shingle

Timberline Solar, introduced earlier this year, is reported to feature the first “nailable” solar shingle. It is also said to be the only roof system to directly integrate solar technology into traditional roofing processes and materials.

Congressman John Carter was joined by Mayor Josh Schroeder and other community leaders to celebrate the groundbreaking. Construction is on track to be completed in the summer of next year, with full operation by the end of 2023. Portman Industrial is the owner and developer of the building and ARCO/Murray is the construction partner.

“Texas’s 31st district continues to grow because it’s a great place to live and work, and today we see more of that growth,” said Congressman Carter in the release. “I’m proud that GAF Energy has chosen our great community to call home and create hundreds of new manufacturing jobs right here in Georgetown. GAF Energy is a shining example of the American spirit of innovation to meet the needs of today, while focusing on the future. I welcome them to my district and look forward to their continued success in their new home.”

Once complete, the manufacturing facility will provide hundreds of new U.S.-based, clean energy manufacturing jobs in the Georgetown area. GAF Energy said the new facility builds on its track record of delivering a best-in-class solar roof product that is assembled in America. The company’s first manufacturing facility, in San Jose, California, was completed last year.

“One of the reasons I was drawn to work at our parent company, Standard Industries, was their commitment to U.S.-based jobs and manufacturing,” said Martin DeBono, president of GAF Energy, in the release. “We’re thrilled to be building the future of solar here in Georgetown, Texas. The community has welcomed us with open arms—and made the decision of where to build our second facility easy. We’re producing our technologically cutting-edge Timberline Solar roof here in the U.S. because we believe it allows us to make the best product for our customers.”

Since its launch earlier this year, Timberline Solar has received multiple awards and honors, including the Best of Innovation award from CES. It also received a Green Builder Sustainable Home Award, Good Housekeeping Editor’s Choice for CES 2022, a Fast Company World Changing Ideas award, and an NAHB Best of IBS Award, Most Innovative Construction Tool, the company said.

The LEGO Group to Establish U.S. Manufacturing Plant in Virginia