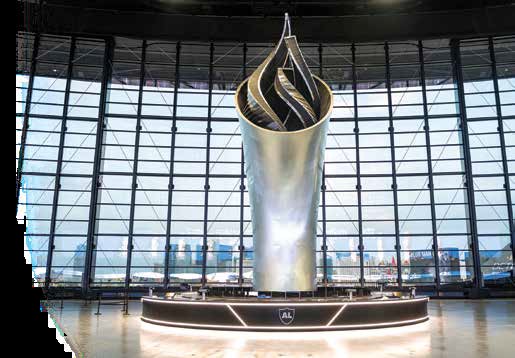 The finished Al Davis Memorial Torch stands 93 feet tall and is reported to be the largest free-standing, 3D-printed structure in the world. The reinforced polycarbonate substructure is finished with 1,148 machined aluminum façade panels, giving the structure its polished silver appearance. (Photo: Business Wire)

CLINTON, Tenn.—The NFL’s Las Vegas Raiders football team wanted to commemorate its late owner, Al Davis, by creating a stunning architectural centerpiece for its new Las Vegas stadium. Thanks to the collaborative efforts of three companies with the combined expertise to complete a large-scale additive manufacturing project, the Raiders received a 3D-printed structure that is reported to be among the world’s tallest at 93 feet high.

The structure is a striking, nine-story-high “memorial torch” constructed of 225 3D-printed blocks made of carbon fiber-reinforced polycarbonate (PC), each weighing about 350 pounds.  Inscribed high on the structure is a quote from the team’s former owner, proclaiming, “The fire that burns brightest in the Raiders organization is the will to win,” according to a release from materials supplier Techmer PM.

Dimensional Innovations (DI), of Overland Park, Kansas, designed and 3D printed the structure. Based on the structure’s unique shape and precision requirements, DI purchased a Large Scale Additive Manufacturing (LSAM) machine from Dale, Indiana-based Thermwood Corporation to do the work. A team of 18 employees invested more than 50,000 hours in developing, creating, and installing the structure. Dimensional Innovations printed the PC blocks nearly continuously for more than seven months, according to the release.

Dimensional Innovations performs a test fit prior to final installation using several of the 225 blocks that comprise the internal structure of the Al Davis Memorial Torch. Each block was 3D printed on DI’s LSAM and is made of Techmer PM’s Electrafil® 3DP carbon fiber-reinforced polycarbonate composite. Each block weighs about 350 pounds. (Photo: Business Wire)

“Techmer PM worked closely with Thermwood to develop the advanced technology needed to complete a project of this magnitude,” Susnjara said in the release. “Their material, and its ability to process flawlessly through our LSAM system, was a critical component to successfully completing what looks to be the tallest 3D printed structure in the world.”

Techmer PM, based in Clinton, Tennessee, is a materials design company that specializes in modifying and fine-tuning the properties of technical polymers. The company formulated and supplied 120,000 pounds of Electrafil®, the carbon fiber-filled PC material.

According to a release from Dimensional Innovations, more than 100,000 pounds of raw material were used to print the blocks, which were then machined on a 5-axis router to a tolerance of approximately the width of a human hair. In addition, more than 1,100 unique surface panels, made from over 35,000 pounds of raw aluminum, make up the reflective surface of the torch. Each panel was robotically painted and sports a custom finish for reflectivity, the company said.

“When undertaking a project of this size and magnitude, we needed a partner who understood the development process, as well as the manufacturing technology as a whole,” said Dimensional Innovations Sports Practice Director Justin Wood, in the release. “That’s precisely what we received with Techmer PM. They supported us during the ideation phase for the Al Davis Memorial Torch and ultimately supplied the key material for a structure that is truly larger than life.”