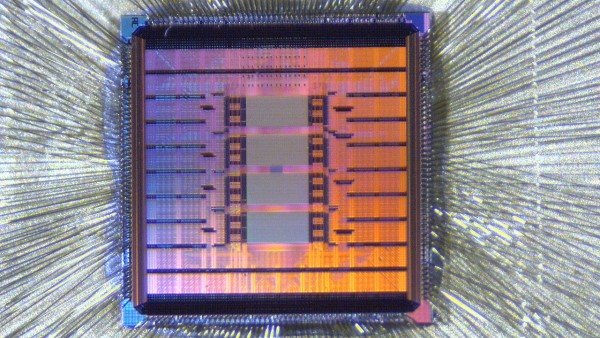 This NIST-developed chip is used to measure the performance of memory devices used by artificial intelligence algorithms. NIST and Google have signed a cooperative research and development agreement to produce a new suite of chips for measuring the performance of devices used in a range of advanced applications. (Image courtesy B. Hoskins/NIST)

Cooperative research agreement aims to unleash innovation in the semiconductor and nanotechnology industries.

GAITHERSBURG, Md. — The U.S. Department of Commerce’s National Institute of Standards and Technology (NIST) has signed a cooperative research and development agreement with Google to develop and produce chips that researchers can use to develop new nanotechnology and semiconductor devices.

The chips will be manufactured by SkyWater Technology at its Bloomington, Minnesota, semiconductor foundry. Google will pay the initial cost of setting up production and will subsidize the first production run. NIST, with university research partners, will design the circuitry for the chips. The circuit designs will be open source, allowing academic and small business researchers to use the chips without restriction or licensing fees.

Large companies that design and manufacture semiconductors often have ready access to these types of chips. But the cost can run into the hundreds of thousands of dollars, presenting a major hurdle to innovation by university and startup researchers. By increasing production to achieve economies of scale and by implementing a legal framework that eliminates licensing fees, the collaboration is expected to bring the cost of these chips down dramatically.

“By creating a new and affordable domestic supply of chips for research and development, this collaboration aims to unleash the innovative potential of researchers and startups across the nation,” said Under Secretary of Commerce for Standards and Technology and NIST Director Laurie E. Locascio. This collaboration was planned before the recent passage of the CHIPS Act, but, Locascio said, “This is a great example of how government, industry, and academic researchers can work together to enhance U.S. leadership in this critically important industry.”

“This is a great example of how government, industry, and academic researchers can work together to enhance U.S. leadership in this critically important industry.”

—Under Secretary of Commerce for Standards and Technology and NIST Director Laurie E. Locascio

Modern microelectronic devices are made of components that are stacked like layers in a cake, with the bottom layer being a semiconductor chip. The NIST/Google collaboration will make available a bottom-layer chip with specialized structures for measuring and testing the performance of the components placed on top of it, including new kinds of memory devices, nano sensors, bioelectronics, and advanced devices needed for artificial intelligence and quantum computing.

NIST anticipates designing as many as 40 different chips optimized for different applications. Because the chip designs will be open source, researchers will be able to pursue new ideas without restriction and share data and device designs freely.

“Google has a long history of leadership in open-source,” said Will Grannis, CEO of Google Public Sector. “Moving to an open-source framework fosters reproducibility, which helps researchers from public and private institutions iterate on each other’s work. It also democratizes innovation in nanotechnology and semiconductor research.”

The SkyWater foundry will produce the chips in the form of 200-millimeter discs of patterned silicon, called wafers, which universities and other purchasers can dice into thousands of individual chips at their own processing facilities.

The 200mm wafer is an industry standard format, compatible with the manufacturing robots at most semiconductor foundries. Giving researchers access to chips in this format will allow them to prototype designs and emerging technologies that, if successful, can be integrated into production more quickly, thus speeding the transfer of technology from lab to market.

NIST will host a virtual workshop Sept. 20-21, 2022, on the use of chips for measurement science and prototyping. The workshop will include a working group meeting on the NIST/Google collaborative research and development agreement that will be open to public participation. Information and registration instructions are available on the NIST website.

FARO to Consolidate and Outsource Manufacturing to Sanmina